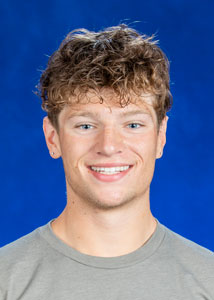 Beckstead-Holman, a native of Canada, became the fastest man in the history of NJCAA swimming in the 50 and 100 backstroke events at the Anne Wilder Aquatic Complex on the IRSC Massey Campus in Fort Pierce this past March.

He additionally set new NJCAA National Records at the 2022 NJCAA Swimming and Diving Championships and captured individual national titles in the 200 backstrokes and 100 Individual Medley at the meet.

“William is always working hard in training and never shies away from a challenge,” states Sion Brinn, IRSC Head Swim Coach. “His performance goes to show that hard work works.”

Beckstead-Holman was also named the 2022 NJCAA Male Swimmer of the Year.

Indian River congratulates William Beckstead-Holman on his accomplishments and this honor.