Captain Malcolm Johns was recognized today with the Indian River State College Distinguished Alumni Award. The award is presented annually to an individual who has achieved a high level of success in his or her chosen career and is an exemplary role model for students. The honor was conferred during the College Awards Ceremony, where Captain Johns served as featured speaker. 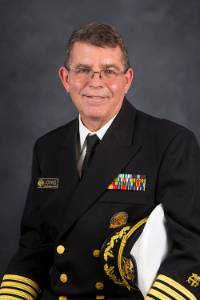 Captain Johns is an Officer of the Commissioned Corps of the U.S. Public Health Service (USPHS) and has been on active duty in the service of the United States for more than 27 years. He currently serves as the Director of BioWatch Quality Assurance and Jurisdictional Coordination with the United States Department of Homeland Security. His love of the biological sciences blossomed at Indian River Community College, which he attended from 1976 to 1978. He then continued his studies earning a Bachelor’s of Science Degree in Biology from Florida Atlantic University and a Master of Science in Medical Microbiology and Bacteriology from University of Pittsburgh School of Medicine.

“As a biochemist myself, I have a deep appreciation of Captain Johns’ professional contributions,” states Indian River State College President, Dr. Ed Massey. “He is an exemplar of how education can ignite one’s passion and fuel one’s future. His story of perseverance and commitment embodies the spirit of IRSC students past and present and we are honored to recognize him with this year’s Distinguished Alumni Award.”

In fact, Captain Johns worked throughout his academic career—from bagging groceries for Publix Supermarkets while in high school to working in cafeterias and supermarkets and as an undergraduate teaching assistant during college. He set his academic goals high, despite starting out with limited resources.

“I apply the concept of ‘THINK’ to my life,” states Johns. “What do I mean?  Tenacity.  Honesty. Integrity. No fear. Knowledge. My message to students is stick to your dream, pursue it and overcome all odds.  Be honest and be exemplary in your conduct. Never ever be afraid to do the right thing even if it terrifies you, and recognize that the biggest source of knowledge is when you know to learn from your mistakes.”

Captain Johns has put his deep knowledge of biology and microbiology in action in myriad ways. He has served with the U.S. Department of Health and Human Services (HHS) as the Office of Emergency Preparedness Metropolitan Medical Response System Program Manager, as HHS liaison to the Federal Emergency Management Agency for several hurricane response missions, and as HHS liaison to the Federal Bureau of Investigation in response to the September 11, 2001 terrorist attacks. His detail with the U.S. Department of Homeland Security commenced in 2003 and he has since served in various capacities, including his current role as the Director of Quality Assurance on a national counter biological terrorism program in the Countering Weapons of Mass Destruction Office.  During this time, Captain Johns was selected to serve on the Department of Defense (DoD) Interagency Committee for Comprehensive Review of DoD Laboratory Procedures, Processes, and Protocols Associated with Inactivating Bacillus anthracis Spores, where his contributions earned him the Award for Excellence from the Under Secretary of Defense (Acquisition, Technology, & Logistics).

Prior to joining the USPHS, Captain Johns was a commissioned officer in the United States Navy.  His first tour of duty was to the United Kingdom Ministry of Defense Chemical and Biological Defense Establishment. His final tour of duty in the U.S. Navy was on detail to the Central Intelligence Agency. His work as a civilian included conducting DNA fingerprint analysis for the Molecular Genetics Laboratory at the Western Pennsylvania Hospital in Pittsburgh, Pennsylvania, and employment in pharmaceutical manufacturing and quality assurance.

He continues to serve the nation while residing in Maryland with Christy, his wife of 35 years.