IRSC graduates will soon be entering the workforce for the first time or utilizing their new degrees to take on increased responsibilities at their present workplace; others will continue their studies at IRSC or at university. In celebration of the December 2019 graduating class, we share a selection of inspiring stories from your Treasure Coast neighbors and new IRSC alumni. Graduates varying in age, background and life circumstance contributed these stories, including 15-year-old Indian River County resident Autumn Horner and first-time student Elizabeth Ricucci-Rinnooi of St. Lucie County, who enrolled at IRSC at age 68. 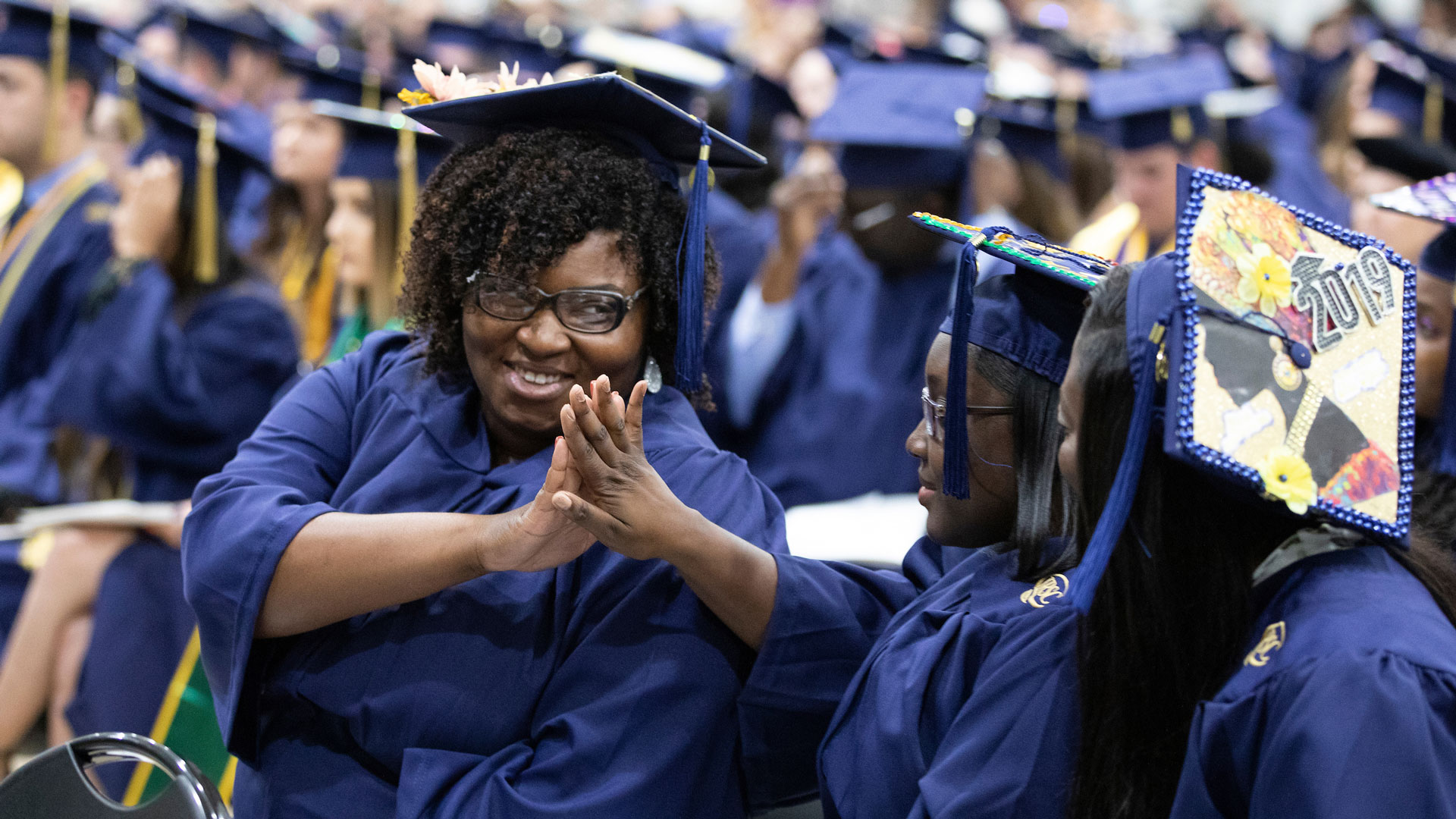 “This journey has been one of the toughest experiences of my life, but I have grown tremendously as a person.” —Danielle Horton, Port St. Lucie

It had been 15 years since Danielle Horton had last been in school. The single mother and sole provider for her household started the journey to become a middle school teacher while still working a full-time job. GED in hand, she enrolled at IRSC. Challenges arose, but Danielle prevailed. She will earn her B.S. in Middle Grades Science this December. She plans to work for Dan McCarty Middle School and in a few years work on obtaining a Master’s Degree.

“IRSC has fully prepared me for this transition. I’m on my way to achieve my dream.”—Seth Kaiser, Vero Beach

With a goal of one day owning a chiropractic practice, Seth Kaiser enrolled in the Bachelor’s Degree in Organizational Management program at Indian River State College. Here he aspired to gain the skills and set the foundation for being a future business owner. In addition to taking classes for this program of study, Seth enrolled in specific science classes required for chiropractic school acceptance. His hard work and perseverance paid off. Seth was accepted into the Palmer College of Chiropractic program, where he plans to attend after his IRSC graduation.

"As a young person, I had been told that I wasn't bright enough—I started college at the age of 68.”—Elizabeth Ricucci-Rinnooi, Port St. Lucie

At age 68, Elizabeth learned that the human body could potentially live to be 120 years old. Despite some significant health setbacks, she decided that there was still plenty of time to do something else with her life and headed to the IRSC Pruitt Campus. During a meeting with an advisor, Elizabeth heard the words, "Yes, you can attend college." She walked out crying tears of joy. Today Elizabeth seeks to inspire as many people, no matter what their age, to seek knowledge and never give up. She graduates with an Associate in Arts Degree and plans to return to IRSC at some point in the future to enroll in baccalaureate studies.

“I started attending Indian River State College at 14 years of age. I am 15 now, and I have maintained a 4.0 GPA throughout my courses.”—Autumn Horner, Vero Beach

Autumn Horner says the best thing about attending IRSC is the flexible classes they offer to students. Virtual and weekly courses allow students to have more free time to focus on activities like internships, jobs, and community service, resulting in a well-rounded college experience. That also gave her time to care for her autistic brother, which coupled with volunteering at Cleveland Clinic Indian River Medical Center, has motivated her to begin a journey in medicine. After graduation, Autumn is off to continue her education at Penn State. Her long-term goal is to become an orthopedic surgeon. Autumn is pleased to carry on a family tradition as an IRSC alumnus—both her mother and father earned degrees from IRSC.

“I would not have changed my time at IRSC for the world. I have now gained the confidence to spread my wings and am ready to take on the university lifestyle.”
—Casey Campbell, Jensen Beach

Moving from California to Florida was challenging for Casey Campbell. As senior year of high school was approaching, she aimed to enroll at university, but had trouble with the standardized entrance exams. She enrolled instead at IRSC, and despite fear of exams and shyness in class, she managed to make the Dean’s List. Casey was invited to join Alpha Phi Sigma—the Criminal Justice National Honor Society—where she was an active participant in several community service projects. Casey completed her Associate in Arts—Criminal Justice track in a single year and intends to study psychology at Florida Atlantic University.

“I hope to start working right after I have the privilege of passing the NCLEX. I am excited and hopeful that I will work in an intensive care unit at a trauma hospital near our area. I know I still have a lot to learn, but I feel that IRSC has done the best to prepare me for the workforce.” — Brianna Hoeffner, Fort Pierce

Brianna Hoeffner of Fort Pierce started out as an IRSC Dual Enrollment student. While in high school, she took college-level courses—including Honors courses that advanced her skills in critical thinking, presenting, writing, reasoning, and leadership. In 2018, after earning her Associate in Arts Degree, Brianna enrolled in the IRSC Nursing program. To complement her studies, Brianna served as Vice President of the Nursing Student Association and as student representative on the Student Affairs Committee for the A.D.N. program. She also participated in, and graduated from, the IRSC Emerging Leaders Program. Brianna will earn her Associate Degree in Nursing.

“It makes me very proud to say that I’ve earned both my Associates and Bachelor’s degrees from IRSC.” —Alejandro Villa Sarria, Sebastian

Alejandro Villa Sarria plans to join the workforce after graduation. With his Bachelor’s Degree in Digital Media in hand, he plans first to land a job as a graphic designer and later journey into teaching, so that he can share his love of graphic design with others. Alejandro credits his IRSC instructors with getting the best work out of him—improving his technique and encouraging him to become a better designer. He looks forward to future and feels well prepared for what comes next.

“The best thing about attending Indian River State College are the community involvement opportunities, and how each and every one of my professors have truly encouraged and cared about my success.”—Andrea Gomez, A.S. Criminal Justice, Port St. Lucie

Looking back at a single instance that most influenced her college experience, Andrea Gomez quickly credits the public defender investigator internship organized through IRSC. The hands-on learning opportunity allowed her to see the legal side of the criminal justice system. Andrea graduates with an Associate in Science Degree in Criminal Justice and plans on continuing at IRSC for a Bachelor’s Degree before giving back to her nation and her community through military service and an anticipated career in law enforcement.

“I fell in love with all of my instructors, and learned so much from every class. I am grateful I had the opportunity to study at IRSC.”—Emma Van Camp, Fort Pierce

Emma Van Camp earned her Associate in Arts Degree while in high school as a dual enrollment student. Now 19 years of age, Emma has completed her Associate in Science Degree in Nursing, preparing her to seek certification and employment as an R.N. After taking the NCLEX certification exam, Emma plans to seek employment as an R.N.—she is presently a Patient Care Technician at Cleveland Clinic Indian River Hospital. Emma intends to pursue her Bachelor’s Degree in Nursing online through the IRSC Virtual Campus this March.

“I wanted to graduate from IRSC because the best nurses I work with earned their degrees from the College.”—Giorgia Eastwood, Boca Raton

Inspired by her co-workers at Cleveland Clinic, Giorgia Eastwood set out on her journey to become a nurse. She applied to IRSC five times before she was accepted into the Associate in Science Nursing (R.N.) program. The two-year program was challenging, but Giorgia persevered. She plans to put her new degree into action at Cleveland Clinic, and eventually resume her studies at IRSC by applying for the Bachelor’s of Science Degree in Nursing program.

“The best thing about attending IRSC is proving to myself that I am capable of accomplishing great things.”—Jessica Gilley, Port St. Lucie

Jessica Gilley had to deal with a lot of trauma in her life. The new IRSC graduate has triumphed over loss and dark times and is now excited about helping others. With her Associate in Science Degree in Human Services in hand, in January, Jessica will begin classes at IRSC toward a Bachelor's Degree in Human Services. She credits IRSC faculty and advisors with taking time to help her succeed, along with hands-on learning she received through an internship with the Department of Juvenile Justice. The internship, she says, helped her learn as much about herself and she did about the human services field. Jessica’s ultimate goal is to go on for a Master's Degree and become a mental health counselor for troubled adolescents.