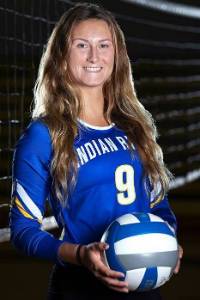 Rusterholz demonstrates leadership both on and off the court, embracing the high academic expectations of IRSC student-athletes while thriving at her sport. She is a member of the 2019 All-Florida Academic Team—one of only ten members from IRSC and 127 in Florida. Additional recognitions include Superlative Distinguished Scholar in the IRSC School of Education; 1st-Team NJCAA Academic All-American; member of the FCSAA All-Academic team; Southern Conference All-Academic Team; and is a two-time Top 10% Student-Athlete at IRSC.

During her time at IRSC Rusterholz has involved herself in more than 25 community service projects including efforts to raise awareness of the need to feed the hungry in our community, clean-up projects at area beaches, and feeding the homeless at food kitchens in the Fort Pierce area.

“Flavia is a diligent student-athlete on the court, in the classroom, and on campus, demonstrated through her leadership, multiple extra-curricular activities, and her countless educational accomplishments,” shares Scott Kimmelman, IRSC Athletic Director. He continues, “We are proud of the recognition of Flavia’s achievement that receiving the Roberta Stokes Award exemplifies.”

Rusterholz will graduate with an A.A. Degree from IRSC in May of 2019 with an emphasis in Physical Education. Upon graduation, she will continue her education and athletic career at Ave Maria University on an athletic scholarship.

Rusterholz now advances as a nominee for the 2019 FCSAA Female Scholar-Athlete to be awarded this May. Congratulations to Flavia for her well-earned recognition!