Mueller Campus Hosts 'When We Were Apollo' Panel Discussion

Mueller Campus Hosts 'When We Were Apollo' Panel Discussion

Nearly 100 Indian River State College (IRSC) students and faculty had the privilege to share in the experiences of three individuals integrally involved in the Apollo moon launch 50 years ago and the producer of the documentary film “When We Were Apollo.” Hosted at the Richardson Center on the IRSC Mueller Campus in Vero Beach on Wednesday, November 13, the panel provided insights into this uniquely singular point in history. 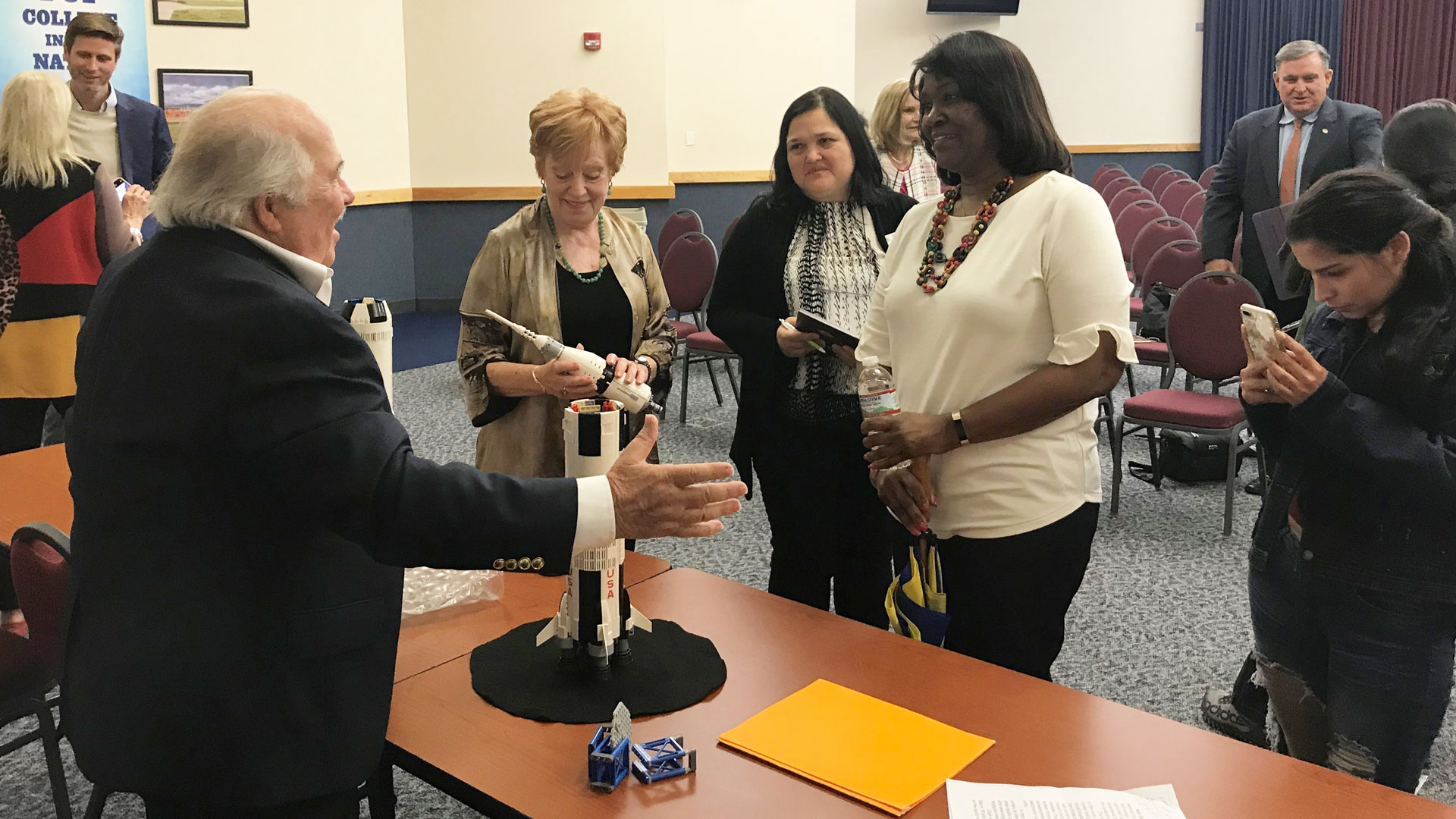 The educational opportunity was provided by the Laura (Riding) Jackson (LRJ) Foundation for IRSC and Indian River Charter High School students in advance of a viewing of the documentary film “When We Were Apollo” at the Majestic Theater later that afternoon. The exclusive viewing was organized in celebration of the 50th anniversary of the Apollo Moon landing and in support of LRJ Foundation.

Members of the panel received questions from students and shared insights about their unique experiences with the Apollo program and thoughts about the future of space exploration. Responding to a student question regarding pursuing a career in engineering, panelist Ken Clark encouraged them saying, “Go for it. The next 10 years—in space exploration—are going as exciting as the 1962-1972 era.” He continued sharing about his experiences as part of the Apollo program more than 50 years ago, “I never had a doubt that we could do it. When the engines lit and—Apollo 11—took off, it was beyond description, it was the most exhilarating moment.”

Jim Handley, a graduate of The Ohio University, began his IBM career in Kingston, New York, as a systems engineer on the SAGE Early Warning Computer System. He later transferred to Owego, New York, as a product engineer on the B-52 Bombing Navigation System. In 1964 he transferring to Huntsville as the project manager for the design, development and support for the Saturn/Apollo checkout and launch programming system.

Ken Clark, grew up in Palatka, Florida. He received his degree in math from Florida Institute of Technology. He was hired in 1966 by IBM’s Instrument Unit (IU) team at Cape Kennedy. The IU was considered the “brains” of the Saturn V, providing the guidance system. His attention to detail and service to the Apollo Program didn’t go unnoticed. In 1968 he was awarded NASA’s Level 3 Manned Flight Awareness Award and in 1969, he received even a higher achievement with the Level 4 Award, as well as the IBM Outstanding Innovation Award. Following the close of the Apollo Program, Clark was one of only a few who remained to work on the Shuttle Program.

Martha Lemasters, is a Florida native from Fort Lauderdale. She began working for IBM at Cape Kennedy as a typist, then secretary, and finally PR writer after proving herself for advancement. As a marketing communications writer, Lemasters wrote about the people who made up one of the greatest technical teams ever assembled in American history. Those stories, shared in her memoir “The Step,” include the heartaches, failures, losses, and challenges to the individuals who made up the Apollo launch support team at the Cape.

Zachary Weil is the director/producer of the film “When We Were Apollo,” an intimate and personal look at the Apollo Space Program through the lives and experiences of some of its most inspiring behind-the-scenes figures: engineers, technicians, builders and contractors who spent the better part of a decade working to get to the moon and back.

The Laura (Riding) Jackson Foundation preserves the historic home of the poet and provides a gathering place for writers by offering writers workshops, courses for both adults and children and community wide events such as an annual Poetry BBQ and monthly “Celebrate a Local Author.” LRJ Historic home was recently moved to the Indian River State College Mueller Campus in Vero Beach. Visit www.lauraridingjackson.org.