Indian River State College (IRSC) President Dr. Edwin Massey has long been regarded as visionary by his colleagues and by higher education professionals across the nation. His leadership and commitment to IRSC and the people comprising its service district were celebrated in many ways over the last several weeks. Receptions were held at each of IRSC’s four branch campuses, and on Tuesday, August 25, the College’s flagship campus in Fort Pierce was introduced with much fanfare as the Edwin R. Massey Campus. Massey, IRSC’s third and longest serving president, retires on August 31 after a distinguished career spanning 47 years. 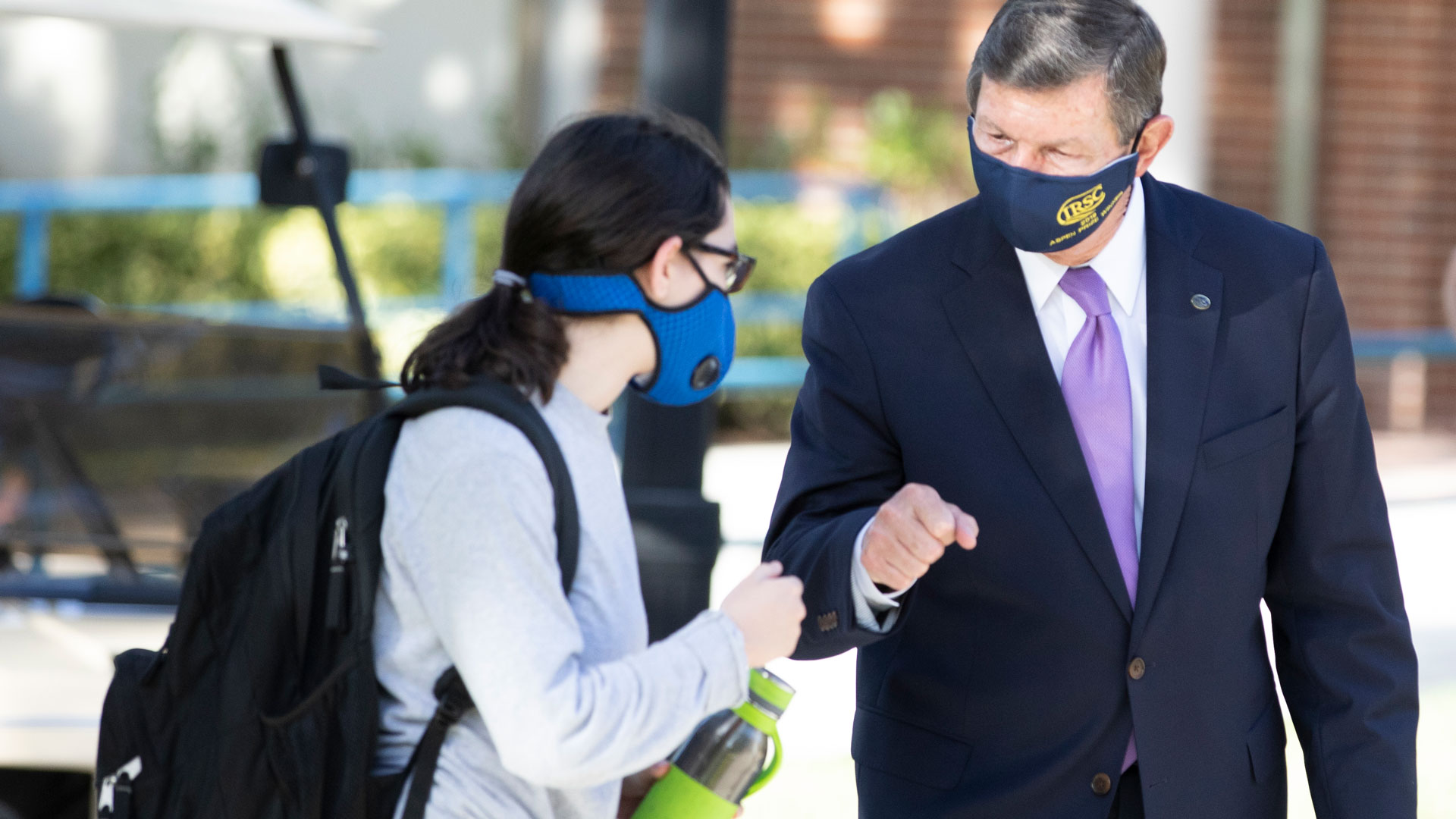 At the campus dedication ceremony IRSC District Board of Trustees Chair José Conrado, spoke to gathered community members, civic and business leaders, and IRSC faculty, staff, administration and students. Donning masks and standing distanced across the campus commons area from the Ben L. Bryan Administration Building along the walk back to the Koblegard Student Union, the group came together to honor Dr. Massey and see his name permanently enshrined on the campus.

“When a leader like Dr. Massey honorably serves their college and community for 47 years—more than 31 as president—there are few gestures grandiose enough to properly say, thank you for what you have meant to us,” shared José Conrado, IRSC District Board of Trustees Chair “Dr. Massey’s leadership has elevated IRSC to heights we could have never dreamed decades ago. His fingerprints are everywhere we look, and everywhere we look there is a success story.”

While the College has received numerous national accolades, Massey’s leadership presence has always been most evident in the local community—Indian River, Martin, Okeechobee, and St. Lucie counties. His presidency is synonymous with strategic and sustained growth, and an unwavering commitment to student success.

In recognition of these accomplishments, Massey was additionally distinguished with the title President Emeritus at the August 2020 meeting of the District Board of Trustees, which preceded the campus dedication ceremony.

During Massey’s tenure, all five of the College’s campuses have expanded, and now encompass over 700 acres and more than 1.5 million square feet of state-of-the-art classrooms, lab space, and operational facilities.

Enrollment has increased more than 300 percent, and the number of degrees and certificates awarded annually has nearly doubled over the past decade. During his tenure, Massey has conferred more than 80,000 degrees and certificates to IRSC students and has been responsible for hundreds of thousands more learning useful knowledge and skills to find gainful employment and greater opportunities.

As technology needs grew and evolved rapidly over the past decade, Massey made certain the needed investments in technology infrastructure happened. These investments earned IRSC the designation as "#1 in the Nation in Technology" by the Center for Digital Education in partnership with the American Association of Community Colleges (AACC) and led to the creation of the IRSC Virtual Campus.

Massey pursued partnership opportunities at the local, state, and national level, working to build the College and the communities it serves, most notably working to establish 20 needed workforce Baccalaureate degrees, an expansion of mission which evolved Indian River Community College to become Indian River State College.

During his tenure, Massey also expanded grant writing capacity securing approximately $170 million in funding since 1990, and grew IRSC Foundation assets from $6.5 million to nearly $117 million, allowing for an average of $3.5 million in scholarships to be given annually to IRSC students.

In April of 2019, Massey guided IRSC to its highest honor to date, the Aspen Prize for Community College Excellence. The award is the nation’s signature recognition of high achievement and performance among the more than 1,000 colleges like IRSC, positioning the institution as the “Top College in the Nation.”