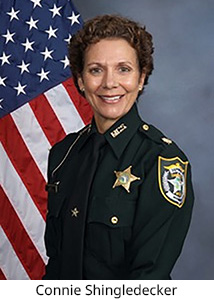 According to the Centers for Disease Control and Prevention (CDC), approximately 3,400 babies in the United States die suddenly and unexpectedly each year. Many of these deaths are attributed to accidental suffocation in a sleeping environment—sometimes called Sudden Infant Death Syndrome (SIDS). But the specific causes of these deaths can be more complex and varied, so investigators have come up with the broader term Sudden Unexpected Infant Death (SUID) to describe any sudden and unexpected death of a baby less than one year old.

Connie Shingledecker, a retired major with the Manatee County Sheriff’s Office, will provide the training at IRSC. Topics will include infant death scene investigation, witness interview techniques, the art of doll reenactments, and comprehensive narrative report writing skills. This training will give investigators the necessary knowledge and skills to complete Sudden Unexplained Infant Death Investigation Reporting Forms (SUIDIRF). It incorporates Guidelines for the Scene Investigator, endorsed by the National Sheriff’s Association, the National Association of Medical Examiners, the International Coroners and Medical Examiners Association and the American Board of Medico-legal Death Investigators.

“No parent should have to bury their child, and during what I consider the most unfortunate and difficult cases to investigate, it is paramount that IRSC partners with the State Attorney’s Office and the Child Abuse Death Review Committee,” said Dr. Raimundo J. Socorro, Dean of Public Service Education at IRSC.

For more information about the training program, contact Dr. Socorro at rsocorro@irsc.edu.

Media interested in covering the second day of training, which involves doll reenactments, should contact Jon Pine at jpine@irsc.edu.