The Indian River State College (IRSC) Foundation announces the appointment of Julia Keenan as Director of Development. In this role, Keenan is responsible for planning, organizing, and directing IRSC Foundation fundraising efforts that include planned giving, capital campaigns, the annual fund and special events. 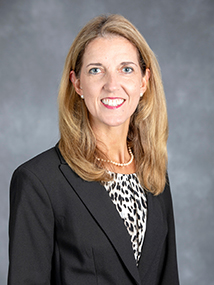 Before joining the IRSC Foundation, Keenan was the Development Officer for Indian River Medical Center (IRMC) from 2010 to 2014 where she supported the 21st Century Campaign to raise $50 million. From 2008 to 2010 Keenan also served as the Executive Director for the Homeless Family Center—a 24-hour residential facility for homeless families on the Treasure Coast. Keenan held multiple roles with the Diocese of Palm Beach working as a teacher from 1992 to 1998, the Family Life Director from 1998 to 1992 and as the Program Director for the Samaritan Center from 2005 to 2008.

In August Keenan starts service as a Board of Director Member of the United Way of Indian River County. She is a current member of the Association for Fundraising Professionals and a former Board of Director/NPD Chair and Co-chair, served on the Association for Healthcare Philanthropy from 2010 to 2014 and the Treasure Coast Homeless Services Council from 2005 to 2010. Keenan is a 2006 Indian River Chamber of Commerce Leadership Training Graduate, was recognized as the 2009 Agency Excellence recipient by the United Way of Indian River County and was a Junior League of Indian River County Women of the Year Nominee for Civic Non-Profit Leader in 2013. She holds her Bachelor of Science in Education from Mansfield University of Pennsylvania and additionally earned her Major Gifts Track Certification from the University of Wisconsin School of Business—Association for Healthcare in Philanthropy.