FORT PIERCE—With an undergraduate career filled with what could have been insurmountable obstacles Sabby Hightower persevered, graduating from Indian River State College (IRSC) with a B.S. in Healthcare Management. She lost her father and her husband. Then a blaze destroyed her home. Still, she excelled at her studies, stayed active in the college community, raised her four young children, and cared for her mother. In recognition of this and so much more, The Association of Florida Colleges presented Sabby with the Leroy Collins Distinguished Alumni ‘Against the Odds’ Award on Thursday, November 18. 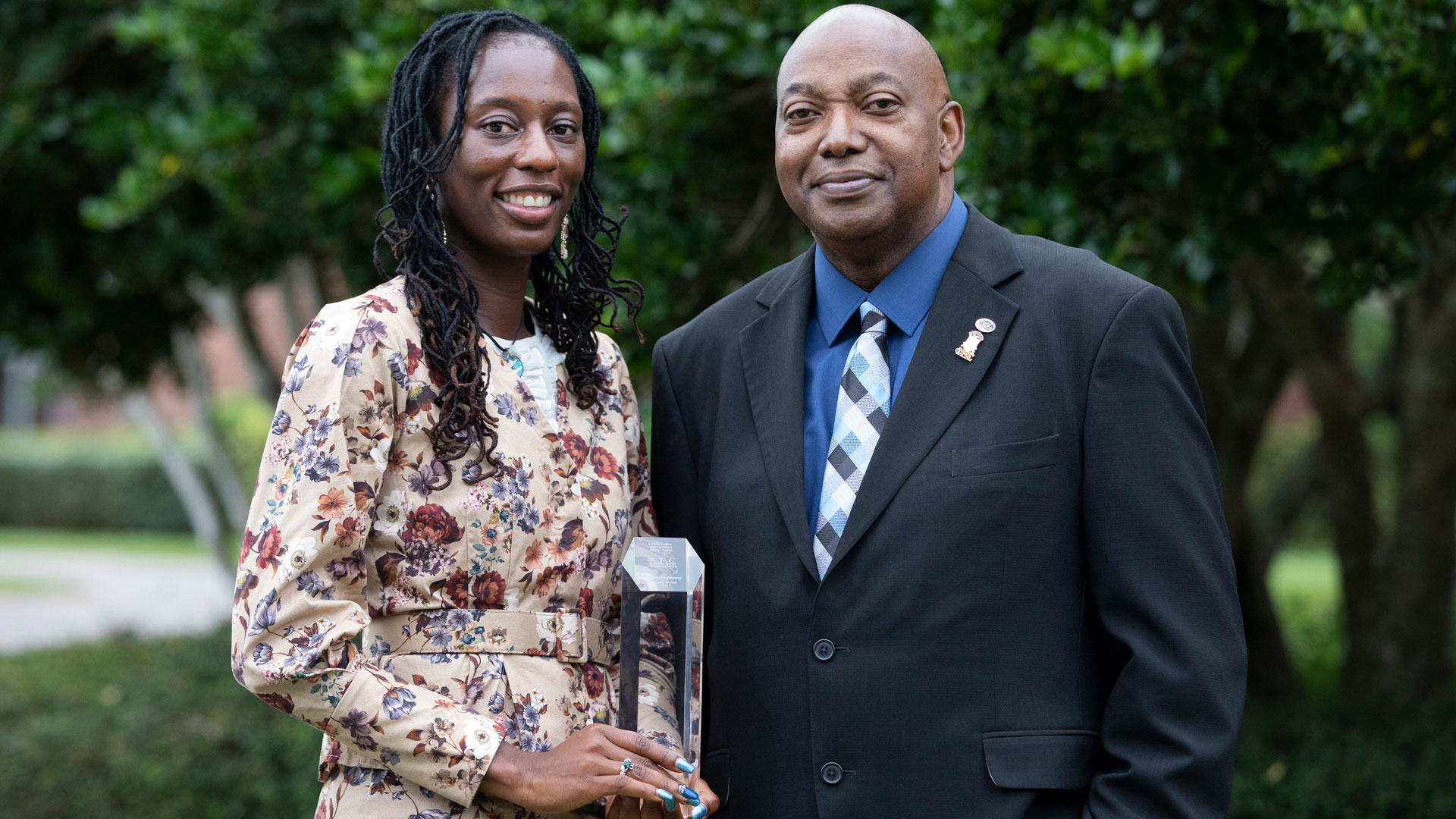 “Our students and graduates all have remarkable stories—none more so than today’s LeRoy Collins against the odds recipient Sabby Hightower,” shares Dr. Timothy Moore, IRSC President. “Sabby, we are so proud of you and all that you've accomplished and all that you have yet to do. You are a true IRSC Pioneer and an extraordinary example for future Pioneers. Congratulations.”

Throughout her career at IRSC, Hightower earned many honors. In addition to excelling in her studies—evidenced by securing two gold medals at the statewide Health Occupation Students of America (HOSA) leadership conference—she was highly active in campus life. She served as Vice President and Parliamentarian of the Campus Coalition Government (CCG); served as a Board Member with the IRSC Collegiate DECA and HOSA chapters; participated in the IRSC Emerging Leaders Program; served as peer mentor and educator in the Women of Color and Legacy Leaders programs; and welcomed prospective students as a Student Ambassador. Hightower earned leadership, service, and academic awards from Collegiate International DECA and was named CCG Representative of the Year (2017).

Hightower graduated from IRSC in May 2019 with a Bachelor of Science Degree in Healthcare Management. Staying focused on her educational goals, she immediately entered the Executive Master of Health Administration, Health/Healthcare Administration Management program at Florida Atlantic University, graduating in 2020. Before embarking on doctoral studies at Saybrook University, she returned to IRSC for a Technical Certificate in Entrepreneurship in the Spring of 2021. Hightower expects to complete a Ph.D. in Mind-Body Medicine: Specialization in Integrative Wellness Coaching in 2025.

“Sabby has overcome a lot of adversity in her life, and against all those odds she managed to go on and get her Associate Degree, Bachelor's Degree, and Master's Degree and getting ready to go for her doctorate.” shares Frank Watkins, IRSC Vice President of Student Affairs, who presented Hightower with her award. “She is someone who is dedicated to themselves, but at the same token, she is one of those individuals that would always give to other students as well.”

Such accomplishment has truly come “against the odds.”

Hightower’s father passed away in 2016 after suffering a series of strokes. With four small children to care for, she and her husband began looking after her mother, a paraplegic with severe health issues.

In March 2017, Hightower’s husband went into sudden cardiac arrest and was rushed to the hospital, where he was pronounced dead.

After the passing of her husband, Hightower and her children moved into her mother’s home. In November 2018, a blaze destroyed that home. Thankfully, the family escaped unharmed.

Sabby credits her IRSC family with helping her stay the course. “With the loss of a couple of loved ones in my family, I needed the community of IRSC to grab hold of my hand to keep me strong and motivated, and for that reason, I was able to prevail,” she shares.

Her steadfast commitment to education, leadership, and volunteerism continues today. Hightower is Chair-elect of the LPC East Florida 2021/American College of Healthcare Executives; Corporate Compliance & FQHC Accreditation Leader for Treasure Coast Community Health; mentor to HOSA members and officers at IRSC; and is a Volunteer Caregiver Concierge at VNA of the Treasure Coast.

About the LeRoy Collins Award
The 28 colleges of the Florida College System (FCS) provide a bridge of opportunity for more than 21 million residents of the state to fully develop their talents and abilities, and alumni of the FCS impact lives daily and enrich the world around them. In 1990, the Florida Association of Community Colleges and the State Board of Community Colleges developed the Distinguished Community College Alumni Awards to recognize the many significant contributions of Florida’s community colleges and their graduates. The award is named after Governor LeRoy Collins to acknowledge his contributions to Florida’s community colleges.