FORT PIERCE, FL— In an academic year like no other more than 3,200 students will have degrees conferred this spring—marking the ninth consecutive year that the IRSC graduating class has exceeded 3,000. More than one-quarter of graduates (807) will earn Baccalaureate degrees; 1,950 earn Associate in Arts degrees; and 495 earn Associate in Science or Associate in Applied Science degrees. The following vignettes of IRSC students illustrate both drive and perseverance that are hallmarks of Indian River State College Pioneers: 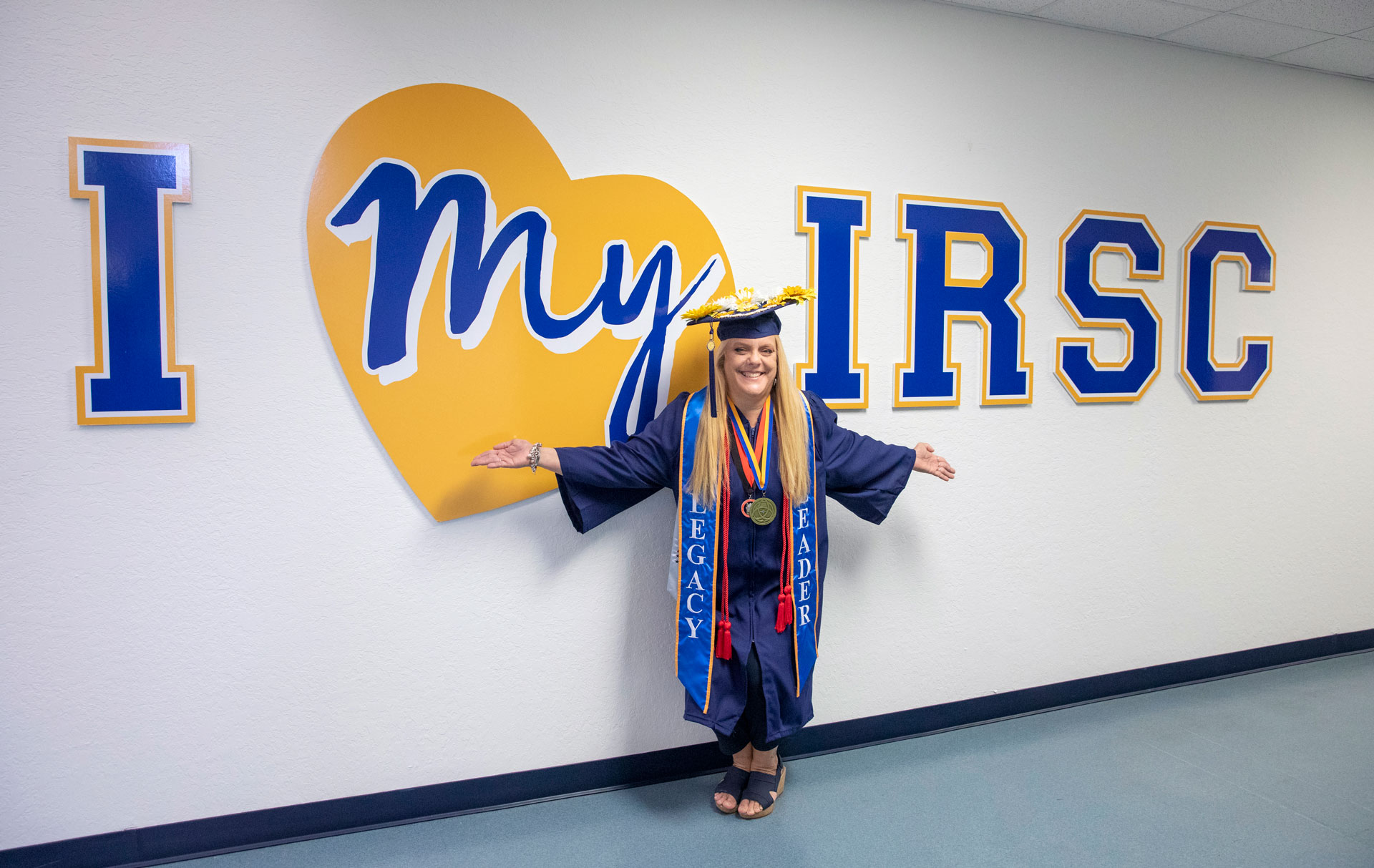 “My mother is on a plaque in the entrance of IRSC. She was one of the Charter Class Graduates, June 11, 1962. My grandmother was the Director of IMT (Individualized Manpower Training) and retired from the College. My children have graduated from IRSC. I am glad to be a part of the legacy.”—Judith Tourjee, Fort Pierce 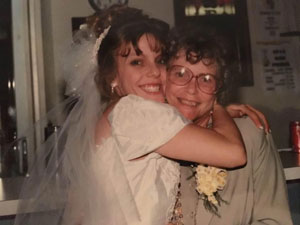 Judi Tourjee started at IRSC at the age of seventeen. She is elated to be finishing her Bachelor’s Degree 30 years later and crosses the stage on May 4 to collect her B.A.S. in Organizational Management. Judi’s journey back to IRSC began when she accompanied her daughter to an advising appointment.  At her daughter’s urging, the advisor found Judi in the system and reviewed her coursework dating back to 1990. After discussion, they found a degree aligned with Judi’s current career. She began her studies the next available term. For her next chapter, Judi plans to continue working in her current field and use her new degree to become more marketable for when opportunities arise. She is also considering pursuing a Master's Degree.

“Neither of my parents were able to finish college due to other life circumstances and I want to honor their hard work and determination.”—Noa Teed, Jensen Beach First generation college student, Noa Teed, receives her Associate in Arts Degree from Indian River State College this May. She credits her family as the source of her inspiration and motivation and says that they instilled the value and power of education in her from a young age. With degree in hand, coupled with her fascination of the space program and keen interest in software design, Noa’s next chapter takes her to Embry-Riddle Aeronautical University where she will pursue her Bachelor’s Degree and reach for the stars.

“I had heard that the IRSC Nursing program was the best one around. And, after getting accepted into the program it really did live up to the hype. The instructors and the support you get throughout the program was great!” —Hannah Connell, Vero Beach

Hannah Connell wanted to be a nurse for as long as she can remember. Initially believing that her dream was not within reach, she started out on the path to become an accountant. Eventually, she decided to “go for it” and pursue her dream; she wanted set an example for her two-year-old daughter “to never give up on your dreams and always pursue your passion.” Hannah started with IRSC in the L.P.N. program in 2019, and upon completion, continued her education in the A.D.N. program as an inaugural member of IRSC’s L.P.N. to R.N. bridge program. For her next chapter, Hannah intends to continue her education and seek a Bachelor’s Degree in Nursing, while securing employment working at patients’ bedsides in a hospital setting.

“As a mother of five children, the availability of online classes made my life easier.”—Samira Slimane, Port St. Lucie

Samira Slimane graduates from IRSC this May with a B.S. in Middle Grades Mathematics Education. She started as an ESL student overcoming barriers to become fluent in English. With diploma in hand, she is looking for employment for the upcoming school year and searching for an institution to pursue her Master's Degree, online, in Mathematics. Samira says that her IRSC professors were a huge source of inspiration. During class, she would look at them with admiration and dream of her next chapter—becoming a college professor. She is determined to achieve that goal and hopefully teach at IRSC one day.

“I took a year and a half off from work to take care of my ailing father with the help of home hospice. I decided to return to school in memory of him to finish my degree.”—Allen Bell, Vero Beach Allen started his educational journey at USF Tampa in 1986 and earned 100 credits. Thirty-one (31) years after leaving USF, he has earned a Bachelor’s of Applied Science in Organizational Management from IRSC. He says the energy of the young students, online access to his classes and great support from the IRSC faculty and staff carried him onward and kept him positive enough to continue. After graduation, Allen intends to join the workforce, and explains that he is grateful that his education will provide the foundation for financial stable during his later years. He hopes that during his next chapter he has the opportunity to work with the hospice organization that provided for him during his darkest time and has inspired him to help others in the same circumstances.

“I am 54 years old, a mom, a grandmother, and I didn't do it alone. What I have learned during this challenging time was that accepting help wasn't a weakness but rather the beginning of a bright future.”—Jackie Geary, Stuart

Jackie Geary’s is route to earning an A.S. Degree – Physical Therapist Assistant is a true profile of perseverance. Along her journey, personal obstacles and hardships loomed large. These included losing a home, experiencing divorce and financial insecurity, and managing as a single mom working two jobs. These situations caught her off guard, but she claims an intense focus on her Physical Therapist Assistant studies became one of the most profound and rewarding moments of her life. She is grateful for best friends who helped with her living situation, IRSC professors for their encouragement and extra tutoring, her guidance counselor for monitoring her progress and recognizing her struggles, and for financial aid staff who helped her receive financial support. Jackie’s next chapter is to find employment and as a proud P.T.A. graduate, she encourages all IRSC student to ask for help when it is needed, stay committed, and not allow failure to be an option.

“My motivation comes from within myself. I am a hard worker and I push myself to be successful and try to achieve my goals and dreams. Many college professors and ASC tutors helped me push through fears and always used encouraging words.”—Nahel Jallouk, Port St. Lucie For Nahel Jallouk, failure was not an option. After a year and a half of mixed results on the General Knowledge test, a state exam required for acceptance into IRSC baccalaureate programs in education, Nahel—an English as a Second Language student—finally passed all four parts needed to begin her educational journey to become a teacher. Prepared and eligible to take the second state exam one year into her studies, she passed that test on try number one. Next week, Nahel crosses the stage to collect her diploma, certifying her Bachelor in Science in Elementary Education with Reading and ESOL Endorsements credential. For her next chapter, Nahel expects to be employed in a public or private school in St. Lucie County, and pursue a Master’s Degree.

“The best thing about attending IRSC was being able to study alongside my sister. I remember telling myself when I saw Sindi graduate for the first time, ‘One day, I’m going to be just like Sindi and have my own degree in hand.’”—Juliana Chavez, Indiantown There’s a lot to celebrate in the Chavez household. On Monday, May 3, Juliana Chavez and her older sister Sindi will cross the stage to accept their diplomas. Juliana will receive an A.S. in Digital Media Technology and Sindi and A.S. in Electrical Power Technology. They are the first in their family to earn college degrees. Juliana is dually enrolled at IRSC and Clark Advanced Learning Center—a charter school operated by IRSC and situated at the College’s Chastain Campus in Stuart—and will celebrate her high school graduation later in the month. Juliana expects to continue her studies at IRSC for her next chapter and enroll in a Bachelor’s Degree program.

“Before I graduated from South Fork High School, I was able to get ahead and complete the first year towards my Associates of Arts Degree through the dual enrollment program. After I graduated from high school, instead of transferring to a bigger institution, I decided to continue my studies at IRSC to complete my Associate Degree.”—Sindi Chavez, Indiantown As a first generation college student, Sindi considered completing and graduating from high school a milestone. She says that graduating with a college degree is “an absolute blessing.” Sindi went on to earn an Associate in Arts Degree from IRSC one year later. After graduation, she intended to transfer to university to earn a Bachelor's Degree in mechanical or aerospace engineering. Upon hearing about the Electrical Power Technology program at IRSC, she instead decided to stay at IRSC to pursue her Associate in Science Degree in that discipline. Her next chapter is to gain employment with a local company like BHI Energy as an Electrical Designer and develop overhead electrical distribution systems.