Over her career with IRSC, Dr. Tina Hart has infused herself into every aspect of the College—from culture to coaching, from accreditation to Aspen. After 40 years of dedicated service, Dr. Hart has announced her intent to retire. 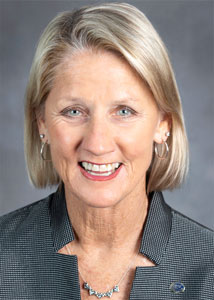 “Student success is the most important thing at IRSC,” shares Dr. Tina Hart. “That’s why it’s been such an honor to serve this College community all these years, connecting resources to change lives. It’s all about the people—our students, our employees, our partners and our community.”

Hart got her start at IRSC as a scholar-athlete. After earning her Associate in Arts Degree and designation as an NJCAA All-American here, she moved on to Florida State University—also as a scholar-athlete and soon-to-be record holder—to earn a B.S. in Social Work.

Her higher education career began at Brevard Community College. She returned to IRSC in 1981 to become the Men’s and Women’s Springboard Diving Coach, Student Activities Coordinator, and Associate Professor. The former Pioneer Diver excelled in motivating students in their activities, their competitions, and in turn, their academic pursuits.

It was her commitment and ability to motivate and inspire that propelled Hart throughout the administrative ranks—from Director of the Office of Institutional Effectiveness (2000) to Associate Dean/Associate Vice President (2003), to Vice President (2009). In 2014 she led the SACCOS decennial reaffirmation process with zero recommendations—a first for IRSC—and was awarded the President’s Cup, the College’s highest distinction for service. Hart led the Office of Institutional Effectiveness until 2016 when she was named Vice President of Enrollment and Student Services. Throughout, her steadfast devotion and focus was student success.

“For 40 years, Dr. Tina Hart has given her heart and soul to Indian River State College—a true Pioneer,” says IRSC President Dr. Timothy Moore. “Dr. Hart has led with distinction, and this College owes her a great debt of gratitude for that life of service. I invite the College community to join me in expressing commendations and congratulations to Dr. Hart.”

Hart, a frequent presenter at national-level conferences and longstanding contributor to collaboratives such as the AACC Pathways Project, Community College Research Center, Frontier Set, JFF, and others, sought to advance the IRSC student experience, equity, and academic outcomes. Her leadership was fundamental in the College’s pursuit of the Aspen Prize for Community College Excellence, which IRSC received in 2019 to recognize its outstanding quality in completion and transfer, labor market outcomes, learning, equity, and more. The College had been a finalist for three prior consecutive prize cycles—in 2015, 2017, and 2019—and awarded Top-3 Finalist with Distinction in 2017.

Hart earned a Master of Education in Counselor Education and a Ph.D. in Higher Education Leadership from Florida Atlantic University. She is a four-time Hall of Fame inductee: NJCAA, FCCAA, St. Lucie County and IRSC.

In addition to her service with IRSC, Hart is an active volunteer with many community organizations, including Hibiscus Children’s Center, United Way, Habitat for Humanity, American Cancer Society, and others.