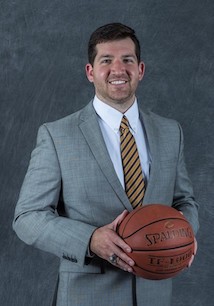 FORT PIERCE, FL—A new era for Indian River State College (IRSC) sports begins on Monday, June 27, when Bill Morosco takes over as Head Coach of the storied IRSC Men’s Basketball program. The new coach steps into a program that has steadily risen to become an NJCAA national and FCSAA Region VIII powerhouse. The IRSC Pioneers have played in the Region VIII Championship and NJCAA National Tournament for two consecutive seasons, advancing to the Sweet 16 in 2022 and the Elite 8 in 2021.

Morosco, a native of Wellington, Florida, comes to IRSC from Garden City Community College (GCCC) in Kansas. In his first and only season at GCCC, Morosco’s team notched an impressive 22-10 overall record averaging 91.3 points per game. Before GCCC, Morosco was Head Coach at Independence (INDY) Community College of the Jayhawk Conference. His teams at INDY proved to be high-octane offensive squads averaging 90 points per game in 2020 and notching key victories over nationally ranked opponents while posting a 23-9 overall record.

“Coach Morosco possesses extensive knowledge of Region VIII basketball and an exceptional ability to recruit,” said IRSC Athletic Director Scott Kimmelman. “We are excited to have him back in Florida to lead and attract student-athletes to the IRSC program. We can’t wait to see where he will take the team next.”

Morosco spent time as an assistant at Barry University and Eastern Florida State College before leaving for posts in Kansas. He has a deep knowledge of the Florida High School Athletic Association coaching community.

IRSC welcomes Coach Morosco and his wife, Samantha, back home to the Sunshine State.