IRSC graduates will soon be entering the workforce for the first time or utilizing their new degrees to take on increased responsibilities at their present workplace; others will continue their studies at IRSC or university. In celebration of the December 16, 2021, graduating class, we share a selection of inspiring stories from your Treasure Coast and Okeechobee neighbors and new IRSC alumni. Graduates varying in age, background, and life circumstances contributed to these stories, including flag bearer Jessica Gilley of Port St. Lucie and mother-daughter B.S. in Nursing graduates Victoria and Mason Bass of Vero Beach.

"I wasted so much time in my life—making mistake after mistake. When I decided to attend college, I knew I needed to put everything I had into my work."—Jessica Gilley, Port St. Lucie, B.S. in Human Services

To get to graduation day, 34-year-old Jessica Gilley had to overcome profound loss, active addiction, self-esteem issues, struggles with spirituality, and mental health difficulties. The concept of a bright future and happiness has motivated her to build her foundation through education and press on to do her best. In 2019, Jessica graduated from IRSC Summa Cum Laude with her A.S. Degree in Social and Human Services. She seized the momentum and motivation from this singular accomplishment and enrolled in baccalaureate studies. Her outstanding achievements have earned her a place in Phi Theta Kappa and the Dean's list 10 times. A role model for students everywhere, Jessica will proudly serve as flag bearer on Commencement Day, when she will also accept a B.S. Degree in Human Services.

"The flexibility of online courses with easy access to both faculty and support staff made going back to school an obtainable goal."—Victoria Bass, Vero Beach, B.S. in Nursing

Victoria Bass graduated from nursing school in 1990 with an Associate Degree. She began her nursing career in the ICU and then transferred to the Emergency Department, where she worked for the next 26 years. Along the way, she and her husband raised five children. When Indian River was adopted into the Cleveland Clinic family, the possibility of B.S.N. requirements was a topic of discussion in hospital leadership meetings. Valuing her position as an Assistant Nursing Manager in the Emergency Department, Victoria decided to go back to school to attain this credential. At this time, Victoria's daughter Mason was in the A.D.N. program at IRSC and encouraged her mother to study there.

Victoria completed her prerequisite courses as Mason fulfilled her A.D.N. requirements. As Victoria embarked on her baccalaureate coursework, she realized that she and Mason were on track to graduate together with B.S.N. degrees. "What an opportunity after 31 years of nursing to fulfill the expectation of my employer alongside my daughter. Not too many people have the amazing opportunity to graduate nursing school or any schooling with their child."

Victoria's next chapter: Continue to work as one of the ANMs at Cleveland Clinic Indian River Hospital Emergency Department.

What makes my experience through IRSC so unique is the fact that I was able to work side by side with my mother to accomplish this goal.— Mason Bass, Vero Beach, B.S. in Nursing

Mason Bass's journey with IRSC started in 2015 as a Dual Enrollment Student. After graduating high school in 2016, she continued her education at IRSC to complete her A.A. degree. She then continued with IRSC in the A.D.N. program and became a registered nurse with Cleveland Clinic after graduation. Shortly after that, she began her B.S.N. studies at IRSC, which coincided with her mother's enrollment in the program. Mason helped her mother navigate online courses, do research, and reach necessary personnel. Victoria provided Mason with knowledge and perspective with her years of experience. Mason calls the experience to work side by side with her mother nothing short of amazing.

Mason's next chapter: applying to a Doctor of Nursing program to become a nurse practitioner.

"I know that the world won't change unless we have more people who are willing to make that change. This is also another reason why I was motivated to do my best in College."—Pascual Francisco, Indiantown, B.S. in Human Services, Concentration in Addiction Studies

Pascual Francisco wants to change the world, one person, at a time. With a devotion to family and community, he was motivated to do his best during his time at Indian River State College. He credits his success here to professors and staff who were as vested in his future as he was. Pascual's IRSC story goes beyond academics. His experience as a work-study student helped expand his social and communications skills. He became a problem-solver as he sought to help fellow students with their problems. He says, "Almost everyone I met in IRSC helped me expand my knowledge of the community and the world itself. Being a work-study helped me meet people from different sides of the world. I gained wisdom from them all."

Pascual's next chapter: Continue working with The Boys and Girls Club and AmeriCorps. Down the road, Pascual would like to return to IRSC to help further his education even more.

"I was in and out of school for so many years, always taking time off to take care of my children. Now that they are older and more independent, I decided that it was time to go back to further my education."— Manal Yamin, Okeechobee, B.S. in Elementary Education with Reading and ESOL Endorsements

Having children and taking care of a household is not easy, especially when going to school simultaneously.  Manal Yamin credits a program that was virtual from the beginning as essential in reaching her goal to pursue a dream of becoming a teacher. "I am blessed that IRSC assisted me in finishing my degree. It is such a great program."

Manal is already working as a long-term substitute teacher. Her next chapter: teaching kindergarten at Central Elementary, the school where she was a student-teacher. 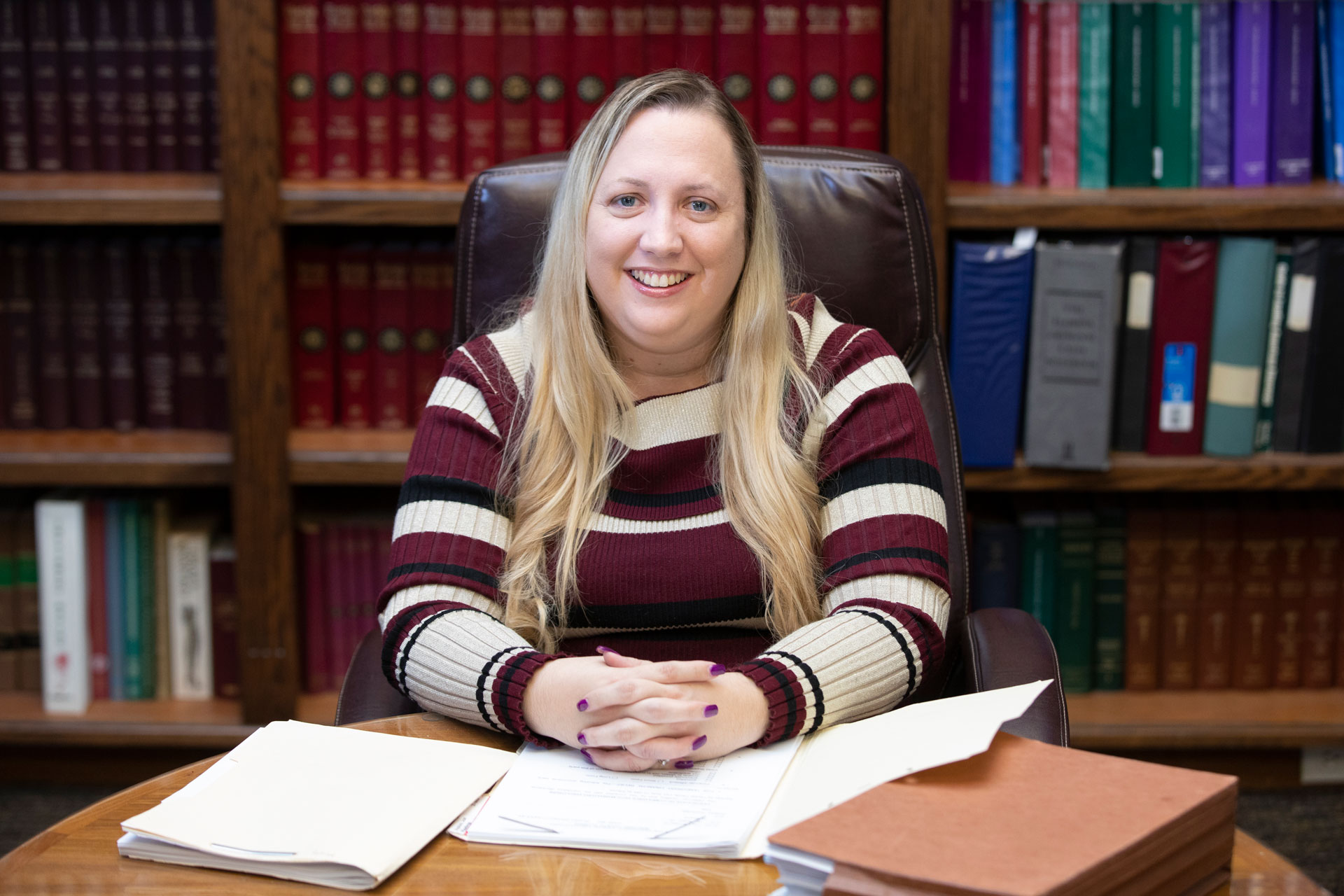 "I received an IRSC Foundation Scholarship for my last semester.  It was a relief not to have to worry about the out-of-pocket costs for school right before graduation."—Heather Davis, Rockledge, A.S. in Paralegal Studies/Legal Assisting

Heather Davis was looking to break the cycle of poverty when she enrolled at IRSC. A single parent working full-time, she had not attended school in nearly 10 years. Concerned about employment instability when the pandemic hit last year, Heather became motivated to finish her degree to enhance her skill set and career marketability. She also wanted to show her daughter, now in high school, that you are never too old to finish college and achieve your goals. She chose IRSC instead of a school closer to home for the quality program. She found the instructors helpful and accessible and received the financial support she needed to persevere.

Heather's next chapter: Earn a Bachelor's Degree and head off to law school to become a family law attorney.

"My plan as a future healthcare administrator is to bring more mental health services to Martin County and the surrounding communities."— Victoria Sesta, Stuart, B.S. in Healthcare Management 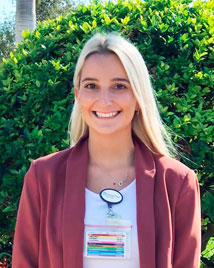 In fall 2019, Victoria Sesta started the Bachelor's Degree in Healthcare Management program at IRSC. In January 2021, she was selected to participate in an internship at Cleveland Clinic Martin Health North Hospital to apply classroom learning to the real world of healthcare management. Driven by a desire to give back to the community, Victoria worked hard at this internship, inspired to support the caregivers of our community. Her success in this internship secured a permanent role as Administrative Program Coordinator for Inpatient Nursing at Cleveland Clinic Martin Health.

Victoria's next chapter: Victoria plans to stay with Cleveland Clinic Martin Health System as a future healthcare administrator as she pursues a Master's Degree in Healthcare Administration.

I'm the first in my family to graduate college. I felt a lot of pressure and have wanted to give up plenty of times, but I kept pushing towards the end goal."—Jaylene Caraballo, Port St. Lucie, A.S. in Nursing

When Jaylene Caraballo started her journey at IRSC in 2014, she knew that she wanted to be an R.N. Despite suffering from test anxiety, Jaylene persevered, taking the entrance exam four times before being accepted into IRSC's L.P.N. program. She graduated with her L.P.N. credentials in 2019 and started in IRSC's R.N. program in spring 2020. This December, she graduates with her Associate Degree in Nursing and has a job offer in hand. It took seven years to get to this day, and Jaylene says she has no regrets—"it's made me who I am today and the nurse I will soon be."

Jaylene's next chapter: taking the boards for her R.N. license and then start the novice nurse program in the Labor and Delivery unit at the local hospital where she did her preceptorship.

"Throughout my years here at IRSC, I've built multiple long-term friendships and have gained knowledge and wisdom that can be applied to real-world scenarios."—Winter Pepitone, Fort Pierce, A.S. in Nursing

Whenever she would doubt or question herself, Winter Pepitone would hear her grandmother's voice reminding her that she could do whatever she put her mind to. Winter had a powerful bond with her grandmother, who passed away right before high school graduation. It was that critical event that launched Winter's nursing journey. She remembers walking through the hospital's doors where her grandmother spent her last moments and being awestruck by the critical care nurses. The care they provided during her grandmother's most vulnerable moments motivated Winter to pursue a career where she could provide that level of comfort and support to other families.

As Winter pursued her education at IRSC, several other life-changing events marked her calendar. With encouragement from her professors, fellow students and family, she pressed on.

Next chapter: After graduation Winter plans to take the NCLEX exam and enroll in the B.S.N. program at IRSC. She would like to work in critical care settings to provide people with the best possible chance of becoming healthier and better versions of themselves.

"I came here on a performing arts scholarship, and I had the privilege of being involved in the IRSC choir, as well as the theatre, shows here at IRSC."—Elizabeth Maskol, Port St. Lucie, B.S. Elementary Education

Elizabeth Maskol found the journey to finishing her Bachelor's Degree full of obstacles. Friends and family tried to convince her to go in other directions, but her heart and intuition helped her persevere. Elizabeth dedicated her time and effort to getting accepted to the IRSC School of Education. She stayed motivated throughout her time at the College by focusing on her goal: to do what she loves—teach! She looks forward to graduation day and the independence that comes with beginning her new career.

Elizabeth's next chapter: After graduation, she plans to get an elementary teaching job and later continue her education and teach at the college level.