Student, graduate, faculty member, department chair, and campus president are among the titles held and the responsibilities faithfully fulfilled by Dr. Harvey Arnold during his five-decade-long association with Indian River State College. After 44 years of service as a College employee—most recently as President of the Pruitt Campus in Port St. Lucie—Dr. Arnold retires on June 30 to begin his next chapter. Dr. Beth Amey who has served as Pruitt Campus Director since 2017, becomes Interim Pruitt Campus President. 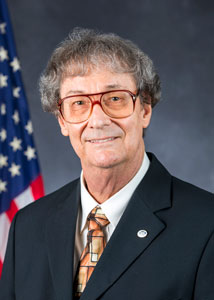 Dr. Arnold entered Indian River Junior College (IRJC) in January 1968 after returning home from the Vietnam War and being discharged from the U.S. Army. He graduated from IRJC with his Associate in Arts Degree in 1969. He continued his education at the University of West Florida, where he majored in economics and earned his Bachelor’s and Master’s degrees. He began his employment with Indian River Community College (now Indian River State College) in January 1977 after serving as an officer in the United States Marine Corps. He was awarded his Ph.D. from Florida State University in 1986.

During his 28-year tenure as an IRSC faculty member, Dr. Arnold was awarded Faculty of the Month three times, named Association of Florida Colleges as Professor of the Year (2002) and distinguished with the Faculty Innovation award (1994). He was appointed Chair of the Social Sciences Department in 2001 and served in that capacity until July 2004, when he was named Campus President of the 132-acre Pruitt Campus in fast-growing Port St. Lucie. The campus serves some 9,000 students annually.

Dr. Arnold has helped shape IRSC’s culture of support and respect for our students, especially veterans, military spouses, and dependents. This culture has distinguished the College with a Military Friendly® Schools Designation. More than a decade ago, Dr. Arnold helped launch an annual Veterans Day panel where IRSC students and the community could hear firsthand from military veterans from each generation. In 2020, Dr. Arnold was a lead contributor to an application that secured a $449,966 grant from the U.S. Department of Education to establish the IRSC Center of Excellence for Veteran Student Success at Pruitt Campus. In recognition for his years of faithful service, the IRSC District Board of Trustees bestowed the title Campus President Emeritus at its June meeting.

Dr. Donna Arnold, who has served with dedication and distinction as a faculty member in the IRSC School of Business for 36 years, will retire with her husband in June.

A national search is underway for the next Pruitt Campus President. Meanwhile, Dr. Beth Amey steps in as Interim Campus President. Amey has more than 20 years of experience in higher education and non-profit sectors and has held positions including Executive Director of the Second Chance Mental Health Clinic in Port St. Lucie; the Director of Academic Programs at Florida Atlantic University; and Recovering Families Program Coordinator for the Children’s Home Society of Florida. Amey earned a Ph.D. in Educational Leadership from Florida Atlantic University; a Master of Social Work from Marywood College, Scranton, Pennsylvania; and a Bachelor of Arts from Bloomsburg University, Bloomsburg, Pennsylvania.